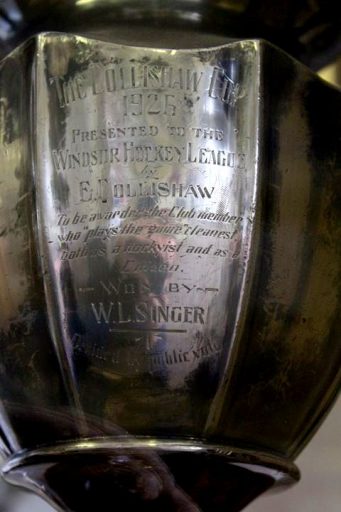 The Collishaw Cup (1926) was presented to the Windsor Hockey League by E. Collishaw. It was awarded to the club member who “plays the game” cleanest, both as a hockyist and a citizen. The cup was won by W.L. Singer – decided by public vote.

The Collishaw Cup seems similar to today’s Lady Byng Memorial trophy, awarded to a “player adjudged to have exhibited the best type of sportsmanship and gentlemanly conduct combined with a high standard of playing ability.”

It is interesting to see the word,”hockyist,” (likely a mispelling of hockeyist) meaning one who plays, or is interested in, hockey. The term also applies to field hockey. Canada is filled with hockeyists, and they are especially prevalent in and around Windsor, Nova Scotia–the Birthplace of Hockey.

You can see this trophy, as well as the Starr Trophy, and many others at The Birthplace of Hockey Museum.