The “Walker Stick” from Cape Breton Visits Birthplace of Hockey 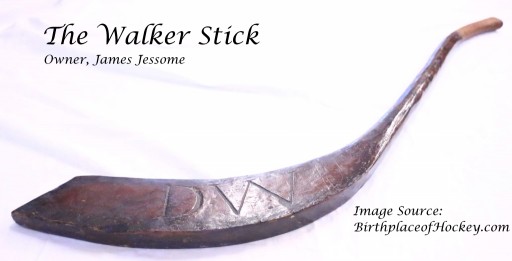 Sept 17, 2016, Windsor Nova Scotia, In late August we had a very pleasant visit in Windsor when James Jessome arrived with his “Walker Stick”. The stick has its roots in Cape Breton and is considered one of the oldest remaining early hockey sticks around. James was very gracious in allowing us to photograph his stick and in taking the time to provide us with the background on the stick below. We hope to have the stick return to Windsor for another visit sometime soon such that others may have to opportunity to see it in person.

Following is the overview on the stick as provided by  owner James Jessome.

“The stick belonged to Donald Walker from Scotch Lake, Cape Breton.  This is approximately 2 kms from Pottles Lake (where the Moffatt Stick was born).  Donald Walker is one of my ancestors.  He was born around 1803.  (I can’t remember off hand how many “great”s grandfather he was).

The story all started in 1970 when my grandmother, Sara Kavanaugh came home for a visit.  The first thing she proceeded to do was to visit her old homestead in Scotch Lake; which was vacant at the time because they had moved out in 1955.  The home was used as a summer place.  When she came home, she wanted to clean the house.  In the process of cleaning the house she found some old coins; which started me on the path of treasure hunting.  At the top of the stairs, I found loose floor boards and pulled some up looking for more old coins.  What I found instead was a long barrel black powdered gun, 2 hockey sticks and a puck (my father told me it was made of leather). The first stick had been broken and was held together with square nails.  The second stick was intact.  My grandmother told me the story of the stick.  She said it belonged to one of her great grandfathers.  She was so pleased to see it, she told me to keep the stick and that it may be worth something someday.  When I found the stick, I actually thought it was a weapon of some sort.  The stick is clearly marked “DW” for Donald Walker.  My mother told me that when she was young she wanted to play with the stick and was told it was an antique and wasn’t allowed to touch it (that was in the late 1920’s). As a child, I used the stick as a goalie stick when I played pond hockey in my neighbourhood.”

With tremendous thanks and appreciation to James Jessome for his contribution to our image collection of information on hockey history at the Birthplace of Hockey.