The following represent a collection of publications and additional information on the development of ice hockey over the course of the past 200 years. 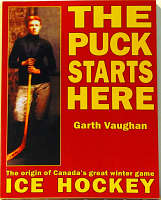 “The Puck Starts Here”
One of the most detailed and authoritative publications written on the history of ice hockey.

Researched and written by Garth Vaughan of Windsor Nova Scotia, this book provides a chronological and historical account of the development and evolution of hockey on ice from the early game of Irish / European Hurley. This is a must read for all ice hockey enthusiasts. Goose Lane Editions and Four East Publications, ISBN 978-086492-212-0

“Windsor Nova Scotia, A Journey in History”
An excellent account of the history of Windsor written by local historian Leslie S Loomer.

Providing a detailed account of the town of Windsor from its inception, this publication highlights in various locations key points in support of the town’s position that it is the birthplace for the evolution of ice hockey as it is known and loved today. West Hants Historical Society, ISBN 0-9680641-0-8

“Black Ice”
This book provides a fascinating and detailed account for the history of the Colored Hockey League of the Maritimes that was founded in 1895 in Halifax, Nova Scotia.

Written by George and Darrill Fosty following 7 years of research, the book details the resilience and contributions to the game of hockey from the Colored Hockey League that existed 25 years before the Negro Baseball Leagues in the United States and 22 years before the founding of the National Hockey League. A must read for all hockey enthusiasts and historians. Nimbus Publishing, ISBN 978-1-55109-695-7

“The Hockey Research Journal” is compiled and published annually by members of the Society for International Hockey Research. Its journal provides detailed and authoritative account for the history of ice hockey.