In 1943, Captain James T. Sutherland, the much-revered Kingston hockey icon, made a “Kingston Claim” for Ice Hockey’s origin which was accepted by the Canadian Amateur Hockey Association. The article reads as follows.

“Historians are said to differ considerably on the place in which the great Caesar first saw “the light of day,” and similarly in respect to the birthplace of Canada’s national winter sport, Hockey. There may be some who will claim sundry and divers places as being the authentic spot or locality.

“Whatever measure of merit the claim of other places may have, I think it is generally admitted and has been substantially proven on many former occasions that the actual birthplace of organized hockey is the city of Kingston, in the year 1888 ( actually 1886).

“The first actual game that we have any record of occurred in Capt. Dix’s rink, which was located on the harbour in front of the city buildings, Kingston. This game was played between teams representing Queen’s University and the Royal Military College. The players wore long white duck trousers, and used a set of sticks which had been borrowed from an eastern firm, said sticks being expressed back to the owners after the game. The rink, which was intended for skating purposes only, had a band stand in the centre of same, and when a player dashed up the ice he was greatly assisted in his attack by his ability to dodge around the band stand while en route. A solid rubber ball which had been cut into a square was utilized for the puck.

“Following this introduction of what has since developed into Canada’s greatest winter sport, a regularly organized hockey league was formed in Kingston. This league was composed of clubs from Queen’s University, the Royal Military College, the “Athletics” and the “Kingstons.” The final game was fought out between Queen’s and the Athletics, the former winning by 3 to 0. Col. A.B. Cunningham, K.C. Nickle, K.C., M.P.P., Col. Irvine, etc., were members of the champion team. The writer played the position of cover point for the Athletics.

“This League had a most successful career; but, with the organization of a provincial body, which has ever since been known as the Ontario Hockey Association, some two years later, the league naturally merged with the larger body and ceased to exist.”

NOTE – Later, when it was pointed out to him that hockey sticks had been imported from Nova Scotia for Kingston’s first games, Captain James T. Sutherland conceded that Ice Hockey must have been first played in Nova Scotia. “Otherwise”, he added, “why send to Halifax for sticks?” This effectively ended the ‘Kingston Myth’ which he had created.

“…The players…used a set of sticks which had been borrowed from an eastern firm, said sticks being expressed back to the owners after the game…”

Arthur Bremner played on the R.M.C. hockey team in 1886

This is a copy of the original article with a larger copy version below for easier reading. 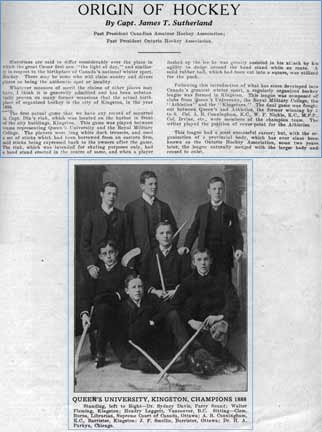 “…The players…used a set of sticks which had been borrowed from an eastern firm, said sticks being expressed back to the owners after the game…”