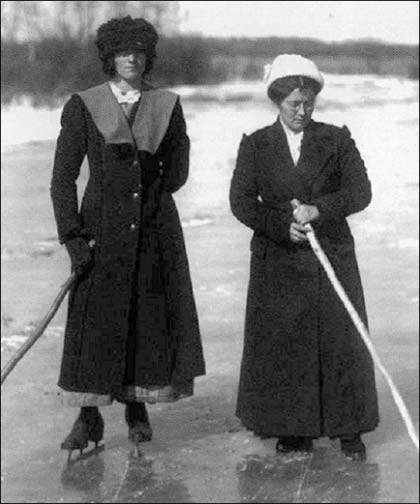 Canadian women who shared the excitement of the increased national interest in Ice Hockey during the 1970s 80s, and the adoption of Women’s Hockey by the Olympics must surely think back to what the game was like decades before, as well as when and how it really got started in the first place.

In the 1890s, women were interested in the game and many were playing on ponds and outdoor rinks. They had teams and leagues, and were vying to be champions in the early 1900s. Although men and boys were playing for a century before that date, and reasonable records exist to paint an accurate picture of what the game and equipment was like, there is little evidence of women’s hockey before the 1890s. By then, however, it appears that women were actively pursuing the game all across the nation. Wherever they played, they used Starr Skates and MicMac brand hockey sticks from Nova Scotia, for Starr Mfg. Co., Ltd. Of Dartmouth, N.S. held the patent on the early skates and the MicMac brand sticks, both of which were favorite brands across the nation into the 1930s.

One photo of Edmonton Ladies taken in 1899 shows them applying Starr Acme Club Skates to their boots. In the early years, like many of their male counterparts, women used no protective equipment whatsoever. Heavy long wool skirts, fancy toques, wool or leather gloves and turtle-neck sweaters appeared to be the chosen outfits of these early pioneers of a game. Gradually over the years, as with the male players, the uniform altered according to the introduction of rougher play and the development of various pieces of protective equipment.

By the 1930s, season-end photos show the women wearing short trousers and long stockings, shin pads and padded gloves. The game has become very popular around the world in the past two decades and today women use all the same type of uniforms and equipment as professional athletes everywhere, including head and face protectors.

Two Talented Windsor Female Hockeyists – Same name (See photos) In the 1920s, Marie Sexton of Windsor was an outstanding athlete and became Captain of the Acadia University Women’s Hockey Team. She later married and settled in Mifflinburg, Pa. Now in her 90s, she often visits Windsor family and friends, and is a member of the Birthplace of Hockey Hall of Fame. In the 1950s, a relative by the same name, Marie Sexton, became one of the best female hockeyists the province has ever known. She married David Dill and lives in Windsor.