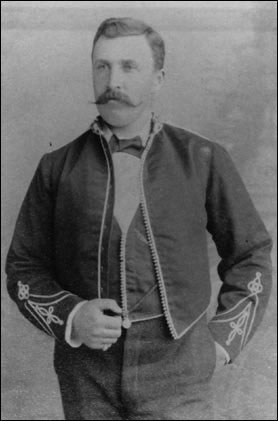 Col. Byron Weston was a Nova Scotian who hailed from Dartmouth where Ice Hockey was developing from Ice Hurley in the mid 1800s. An outstanding athlete, he played with local friends from the Halifax?Dartmouth area as well as with native Mi’kmaq teams. He later became the president of the Dartmouth Amateur Athletic Association and recalled his early life as a hockeyist for James Power. During a newspaper interview in his senior years, he described to Power the early game, rules and wooden pucks.

If a man who is “getting well along,” as age is measured by the calendar, continues to find fun in life, eats a square: meal and sleeps soundly at night, it’s a safe bet that he still has the effervescence of youth bubbling in his veins, no matter what his years.

That, at any rate, is the philosophy of Colonel Byron A. Weston, Halifax’s grand young-old man, who chalked up his 92nd birthday anniversary yesterday’s friends would point to him with pride as a very-much-alive symbol of his life philosophy.
STILL LOVES LIFE

A caller who dropped in to see the Colonel at his fine old-fashioned home on South Park street was informed by his daughter, Miss Edith Weston, that he was down town attending to a little business. From this one gathered that the Colonel’s motto was business as usual let the birthday’s fall where they will. “But he said he would be back very soon.” Miss Weston told the visitor, “because he was expecting you.”

It was not long before the caller was receiving the Colonel’s full-throated greeting: not much longer before ‘refreshments’ arrived, to be discussed in leisurely fashion in a corner of the large living room. It was one of those rooms, now unhappily becoming scarce in these apartment- dwelling days, that gives one a sense of being in a home that has been lived in long and well. Family portraits, rare miniatures and antique paintings adorned the walls, and all about stood numerous mementos of Colonel Weston’s travel’s in foreign parts. “And why shouldn’t I eat well and sleep soundly?” the Colonel asked. “I have had my fun out of life, and I’m still having it – and I have a clear conscience.”

“Do you know,” said the Colonel. “I’ve never had a drink of hard liquor in my life. Never smoked either. Sometimes I feel that I’ve missed some fun at that,” he added with a tinge of something like regret. “I’ve often thought it would be pleasant to sit down with a good cigar after enjoying a well cooked dinner, but I guess it’s too late to start now.”

It may come as a surprise to some Haligonians to learn that their distinguished fellow citizen is no Haligonian himself by birth. Colonel Weston made his premier appearance on the world’s stage in Winterport Maine, and arrived in Halifax with his parents when he was nine years old. His father was a ship-builder on the Penobscot River and he came to Nova Scotia to build in Dartmouth the first marine railway in the province.
GOOD LUCK IN HALIFAX

“I often think how lucky I was that father came to Halifax,” the Colonel mused. “I never could have done as well in that little Maine town as I have here.” His visitor pointed out that if he hadn’t come to Halifax he probably would have gone to some other city and done equally as well.

“I don’t know about that,” he returned, “I might have. My mother was ambitious for me.”

Colonel Weston received his early education at Dr. Gilpin’s school at the corner of Barrington and Sackville streets, then went back to the United States to graduate from Harvard University in 1873.

Colonel Weston practiced law in Halifax in partnership with the late H. McD. Henry, afterward a judge of the Nova Scotia Supreme Court, till 1893, when he was instrumental in founding the Eastern Trust Company. Colonel Weston was general manager of the trust company till his retirement in 1924.

His wife, the former Catherine P. Bonn, of Dartmouth, died in 1926. An only son, Colonel A. W. P. Weston served in France with the 25th Regiment in World War No. 1 and died after his return to Canada. Besides his daughter, Edith Weston, the Colonel has two other daughters, Mrs. A. R. Cunningham and Mrs. H. J. B. Keating, both of Halifax. Colonel Weston is the oldest member of the Nova Scotia Bar Society, to which he was admitted in 1873 and the oldest member of the Halifax Club.

NO DOUBT OF VICTORY

“Of course we’re going to win the war,” he declared with decision, projecting himself nimbly from the past into the present. “the Germans may hang on for a while yet, but we’ll wear them down. All we have to do is get enough planes over Germany to make them feel our weight. …For five years officer commanding the Princess Louise Fusiliers, Colonel Weston retired with his present rank in honour. His military history goes back to the days of the Fenian raids of the ’60’s and the Northwest Rebellion of 1885. That is a long time ago and the Canada of that day and age was not the Canada of today. The Colonel wears the Fenian medal and the Northwest Rebellion medal for the part he played in those history making events and is also a holder of the Victorian long service medal.

HALIFAX, Feb. 18 – (CP) Col. B.A. Weston, 95 died at his home here Saturday after a brief illness. One of the founders of the Eastern Trust Company, Col Weston won distinction in a long military career and for the part he played in two history – making epochs, won the Fenian and Northwest Rebellion medals. A noted marksman, he was picked five times to represent Canada at the Bisley shoot.

NOTE: The Windsor Hockey Heritage Society is indebted to Jeremy McCormack of Halifax, Nova Scotia, for sending us the two “Halifax Daily” reports on Col. Weston, presented above. Thank you, Mr. McCormack.