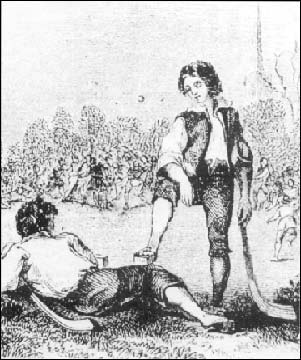 Considering the many ball and stick-ball games represented in the present day Olympics, one has to wonder how they all originated. They were all derived from the same basic ancient game known as CAMP. The book “Traditional Games of England” tells of a game played in the streets of towns and villages as early as 1066 at the time of William the Conqueror and the Norman Invasions.The game was played first by kicking a rock, and later a ball, and was symbolic of the townspeople kicking out the unwanted Norman soldiers from their streets. Neighbors, likewise not wanting the Normans around, would kick the object back to where it came from. The action gave rise to the first street game and eventually was refined to Soccer, Rugby, Football and Association (meaning those who agreed to be interested in playing) . With the introduction of sticks, the game was altered and became the forerunner of all the common stick-ball games including, rounders, baseball, tennis, shinty, bandy, hurley, ground hockey and cricket. Camp, in its infant form thus became the parent of hurley and the grandparent of Ice Hurley and Ice Hockey.

The Dutch play a game on ice using a small ball and clubs, called Kolf, not to be confused with Ice Hockey.

The ancient, delightful, and exciting game of Hurley can be played on open fields in its native Ireland all year round. Back in 1800, boys at King’s College School in Windsor, likewise enjoyed playing the popular field game, but only in those seasons that Canadian weather allowed. From November until April, the frozen rough fields of Nova Scotia were often deep with snow and not favorable to such field games. However, during those winter months, the attention of the King’s students was commonly turned to skating on the ice of the ponds situated around the college. Their favorite being Long Pond on the College Grounds. It was therefore a natural transition for them to adapt the field game to the ice and develop a new winter game of Ice Hurley.

The ball used in Hurley, known as a ‘sliotar’, looks much like a baseball, except that it is cork lined and the stitching is directed toward the outside as the edges of the leather pieces are folded outward rather than inward as on a baseball. The Hurley ball bounced on a hard surface which made it unsuitable for an ice game.

Therefore, it was soon replaced with a flat wooden disc cut from a small tree trunk. The disc would lie flat on the ice, slide easily and was not so likely to bounce about. Since the object was to keep the ball on the ice at all times, the wooden disc worked out well as a substitute for the ball. Since the hitting or striking of the ball in the game of Hurley is referred to as ‘a puck’, or ‘pucking the ball’, it was natural for the new wooden disc to be called a “puck”. The wooden puck was easy to make and so was readily available as opposed to the more complicated hand-made Hurley ball.

The King’s College boys played other games as well as Hurley. Rounders, a game played with bat, ball and bases was popular, as was Cricket. These games had their effect on the development of the new ice game. As time went by, the Ice Hurley took on a character of its own, so that while it still resembled Hurley as played on a field, it came to be quite distinctive, mainly because of the influence of skates and the ice surface on the way the game played out. It continued to be called Hurley for several decades and then gradually took on the name of Ice Hockey. For at least two decades it was known by both names, Ice Hurley and Ice Hockey. Then gradually the name of Hurley was left to describe the original field game, and the ice game came to be called Ice Hockey, or, more simply ‘Hockey’.

Played outdoors on frozen ponds, the game gradually became more popular as the years passed. It came to fill hours of daytime pleasure for boys all over the province. Ice Hurley and Ice Hockey were not at all popular with skatists who wanted the ice to themselves.

Skating was immensely popular in Nova Scotia with the ice of ponds and rinks litterly covered with thousands of people perfecting the art of skating and cutting figures on the ice. Gradually adults took up the game and it took on a position of great importance in the culture of the entire province.

By the time the game reached the west coast in 1890, skating rinks began to be built about the country. Halifax and Montreal had led the way with the first covered indoor rinks in Canada in 1862. Windsor was not far behind, with the construction of its first covered rink in 1870. The first Ice Hockey games to be played indoors were in Montreal, on March 3, 1875. Halifax skatists succeeded in keeping hockeyists out of the skating rinks until 1883.